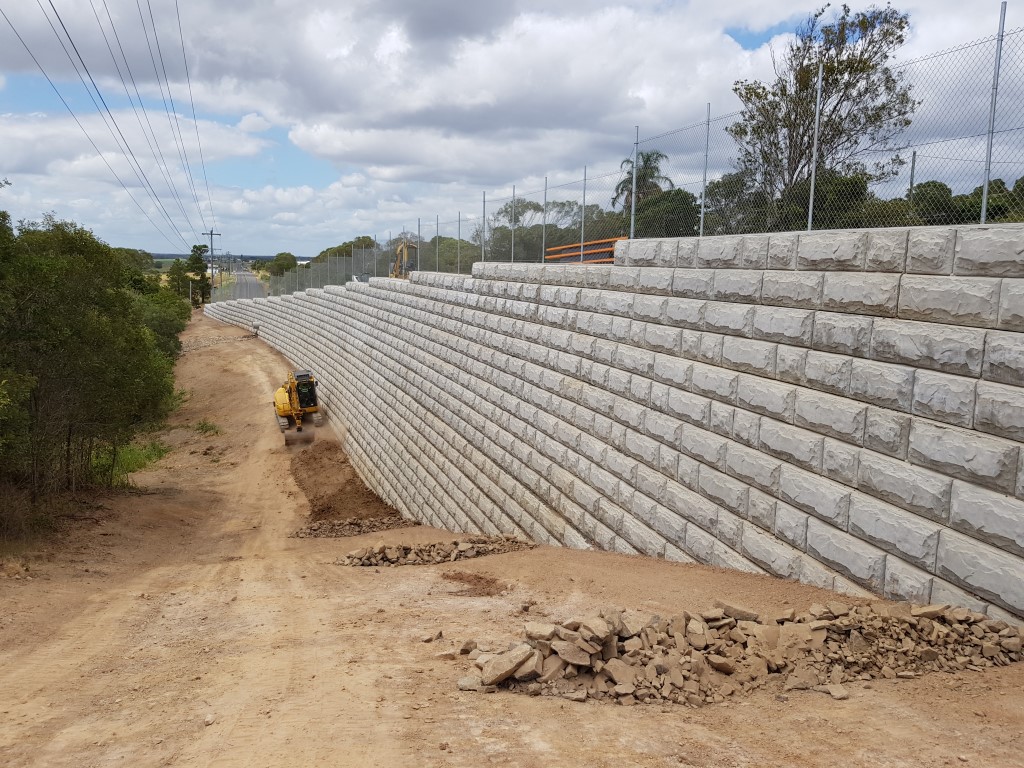 Geoinventions Consulting Services Pty Ltd (GCS) was engaged by Fraser Coast Regional Council to provide a geotechnical design for the proposed Reinforced Soil Wall (RSW) required for the Madsen road upgrade project. This project involves the reconstruction of a 600m section of Madsen Road, Urraween from Morgan Circuit to south of Windsor Way. The purpose was to realign the existing road and allow for safer passage for motorists. Due to the height of the existing embankment and subsoil conditions, the project was deemed as a moderate risk to instability which GCS successfully addressed during the detailed design and construction phases of the wall.

The RSW system adopted for the build comprises of large precast interlocking concrete blocks with two various block sizes. The large modular blocks allowed for rapid installation was was reinforced with 160kN/m geogrid going back 9.5m at its highest point. The large  blocks were selected for this project for both their structural properties and aesthetic appeal. Both AS4678:2002 and RMS R57 specifications were referenced for the design.

The RSW is approximately 125.0m in length and has a maximum wall height of 10.58m with a service life of 120 years. At the highest part of the wall, the foundation material beneath the footprint of the structure had to be removed and replaced with crushed rock due to the presence of soft incompetent soil. A 150mm concrete footing was cast over the crushed rock layer which was founded on XW Rock to provide a level foundation for the large blocks. To allow for construction equipment and future traffic loading, a 20kPa uniformly distributed load was applied to the back of the wall.

GCS completed the retaining wall design on schedule and assisted both the principal contractor SGQ and Fraser Coast Regional Council during the construction phase to deliver the retaining wall as per the design. The entire project was delivered on time and within the project budget.