Livingstone Shire Council is upgrading the existing shire road system by the construction of Panorama Drive-Segment 2 as the proposed northern strategic link. It is approximately 3.4km in length and extends from Crannys Road, Adelaide Park to Laceys Road in Pacific Heights. Panorama Drive will serve as a key transport link to directly connect the northern suburbs of Yeppoon with resource nodes, mines and airports and offers as an alternative route for tourists and residents during traffic congestion or natural disaster on current Farnborough road.

The new road alignment will be formed by using large cut and fill earthworks.

Four major cuts were identified as part of the bulk earthworks and the largest cut had a maximum slope height of 15.8m with a 76 degrees facing angle. To stabilize these very high sections, GCS designed a soil nailing solution with a shotcrete facing to provide the required design life of 50 years.

The construction works for Segment 2 Panorama Drive was completed in September 2017 ahead of schedule. 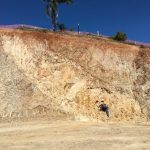 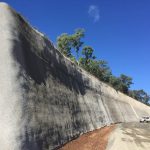